I’ve been thinking a lot about creativity, not just creativity in writing, but in all aspects of life. I think exercising our creativity could mean the difference in living a happy life versus a mundane one. Plus, it has been a while since I’ve engaged in art for pure delight. I think that’s why I’ve been struggling to find a routine that allows me to get in a creative flow. Last week I checked out two books to help me tame the monkey mind and engage my artistic mind. You may have heard of them: Big Magic by Elizabeth Gilbert and The Artist’s Way by Julia Cameron. I’m finding out a lot about how creativity works as well as being reminded of what I knew already, which is that we must play to awaken our creativity and let our minds “romp like the mind of God.” That’s what I did this past weekend, one of the best summer weekends in Waupaca, the annual Arts on the Square weekend, which is put on by the Waupaca Community Arts Board. More morning glories because they make me happy.

From Shuvani Tribal Bellydancers to poured metal tiles, the 10th Annual Arts on the Square had something for everyone, and it only gets better with each passing year. This year the festival began with events every night last week and culminated in a weekend of music, art, food, and exercise. The Waupaca Triathlon and Ride Waupaca were also held over the weekend, so this area was chock full of things to do! 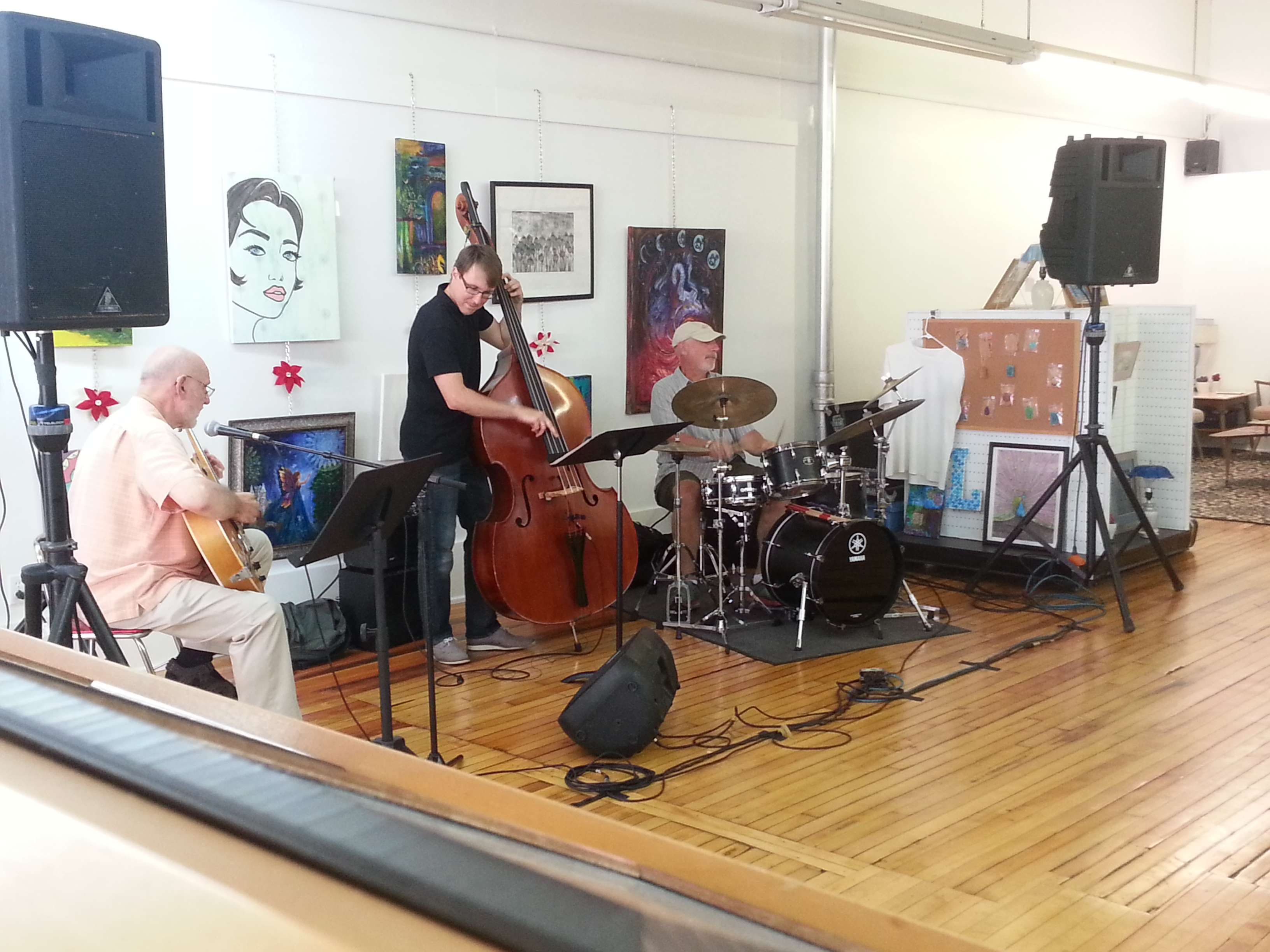 The only problem was that, sadly, rain was forecast all weekend. I didn’t arrive at the festival until about ten in the morning because of rain. Heavy downpours had already erased the beautiful chalk drawings on the sidewalks in front of downtown businesses by the time I arrived, but they didn’t dampen anyone’s spirits. The organizers were prepared and had moved the artists who were there to display and sell their wares into the Rec Center (Waupaca Recreation Center), and musicians took shelter either in tents or nearby stores. Music echoed from the food tent, and jazz flowed from the Union Street Emporium where Erin Krebs knocked me out with her vocals! I also watched Dave Sullivan perform his smooth jazz guitar.

After soaking in the visual arts and the jazz on the square, I stopped off at the We Love Waupaca mixed media and collage workshop to make a collage. I wasn’t really sure how to do what Martha Duerr, the person in charge of that tent, wanted me to do at first. We were supposed to think of a place in or near Waupaca that we loved and try to represent it in collage form on a Waupaca map, but we were supposed to leave part of the map showing. Then we could use pastels to finish it. When I’m faced with an “assignment” like that that requires creativity, I rebel against the constraints. I know enough about artistic temperament and creativity to know that rebellion is nothing but resistance, and resistance manifests itself in fear. I was scared to let myself go, to do something someone might think was stupid. But I’m stubborn enough to realize that, because I felt resistance, I had to make a collage.

The humidity made the tissue paper hard to handle, and the scissors were tiny kid scissors with glitter and glue stuck to them. I felt decidedly uncomfortable. I watched two little kids at the table near me working diligently on their collages and wondered if I could forget my own inhibitions like they had. I remembered what I had been reading about creativity and decided to have fun and see what happened. I thumbed through numerous copies of National Geographic Magazine and bags of pre-cut images and chose the ones that appealed to me. I didn’t know what I wanted to create, but since Bruce is a pilot, I started with an airplane. Then I found a picture of a spillway, and the idea of Hartman Creek State Park came to me, so that is what my collage is supposed to represent. Here it is above (Please excuse the awful picture). Something interesting happened while I was creating the collage. The weather had been sticky and hot for most of the day, but as the collage came together, the rain stopped, the wind picked up and the air cooled way down. The change was palpable, both the change in the weather and in my attitude and release of fear. Coincidence? I’m not so sure.

Wisconsin Poet Laureate Kimberly Blaeser with my friend Bill after he recited his haiku “The Paperclip.”

In the poetry and storytelling tent I bought  a book by Jerry Apps to read by the fire during our long Wisconsin winter. It’s called The Quiet Season: Remembering Country Winters. In addition, the current Wisconsin Poet Laureate, Kimberly Blaeser, recited some of her moving poems.  Again in the storytelling tent, I used a manual typewriter that poet Paul Wiegel brought with him. He used them to write poems on demand for anyone who wanted one. I did my best to write a snippet using one of the more “modern” of the machines and hung it on the bulletin board with the others. Let me just say that I had forgotten how clunky and difficult manual typewriters are to use. Thank goodness for computers! In the picture below is my friend Barb on the left in the foreground writing her thoughts, and that is Paul in the hat sitting on the back left. The last thing I did was to witness the Waupaca Foundry operate a portable foundry onsite to pour metal tiles. That was really something! People made etchings in sand, and the skilled workers from the foundry poured molten metal into the etched molds. After they cooled, people could take their tiles home. The Waupaca Community Arts Board brought back this project for the second time after the success of the community art project, Tell Your Story in the Tiles, was installed at Waupaca’s South Park. This past weekend was rejuvenating and fun. I was able to reconnect with my own creativity and enjoy the talentsof so many artists and musicians and and the hard work of friends and volunteers that make Waupaca such a special place to live.  I ended it yesterday with dinner on the Waupaca Chain o’ Lakes cooked by my friend Mary.  That’s her husband in the above photo with the poet laureate. Bill and Mary own the office supply store Office Outfitters here in Waupaca. I can’t remember when I’ve been so content to call this little town home. 🙂