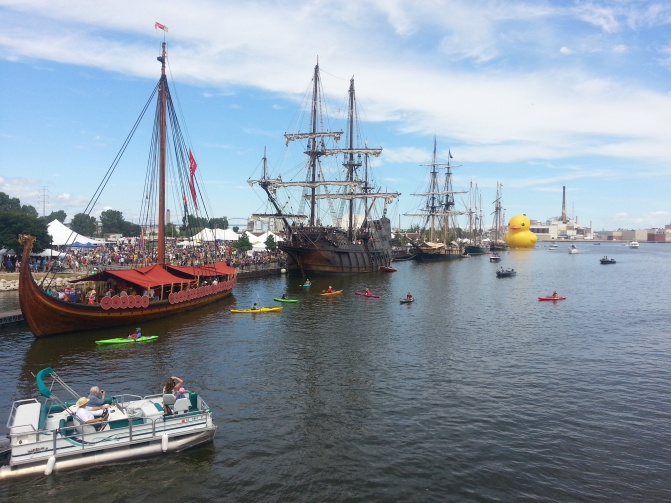 Recently I was revising and editing a portion of my book. When I read the section where one of my characters ends up on the Outer Banks of North Carolina by way of a ship wreck, I realized the details were thin. I don’t know much about the Outer Banks, but I know someone who does.

One of my college friends grew up sailing the Outer Banks near Manteo and Nags Head, North Carolina. I sent him a Facebook message to ask for his help for more information about that part of the country and to ask him some sailing questions. We ended up talking on the phone for awhile instead, which was so much fun, since I had not talked to him since college! He talked about sailing the inlets around the Outer Banks, how treacherous they are, and how they close periodically because of storms and tides. He told me an interesting story about residents in that part of the Outer Banks “pirating” goods from shipwrecks. I was fascinated, so I delved a bit more into that history and found some interesting information to include in my book.

Because I was also trying to rework this section, I also spoke with my good friend and author, Kristin Oakley, about the problems in my manuscript. She helped me brainstorm some solutions and make the decision to include some interesting history of the Nag’s Head area. The idea I decided to include came from my talk with John and also from my research. When I researched the Outer Banks, specifically Nags Head, I found that the reason it bears that name is that during storms the people along the beach would tie a lantern to the neck of one of the coastal ponies. They would lead the pony along the dunes while the lantern bobbed, mimicking the motion of a boat safely anchored. Ships at sea would see the light and steer toward it believing there to be safe harbor, but, of course, they crashed into the shoals  and foundered. Subsequently, the Nag’s Head locals salvaged what they could from the ships! John told me of someone he knows who has a sterling punch bowl and cups from just such a salvaging trip as this. If you are a big fan of Poldark, as I am, you’ll recognize some similarity to what happened on Cornwall’s beaches. Perhaps this is only legend, but I did hear it from a Manteo local. I was intrigued, and so was Kristin.

After these conversations I moved the timeline of my story to earlier in the year of 1869 so that a big storm could be expected to cause sailors trouble along that stretch of ocean, and also I decided for continuity and plausibility the story needed a scene on board the ship that Josiah, one of my main characters, is on to communicate that trouble. I want that scene to include the light bobbing on the beach that the inexperienced sailor follows rather than waking the captain of the schooner, which results in the wreck of the schooner Josiah is on.

Since I know nothing of sailing and my knowledge of the ocean is limited to walking the beach to look for shells and sand dollars or swimming and body-surfing in water only up to my neck, I wondered how to make that scene realistic. Enter The Tall Ships Festival in Green Bay. I love how serendipitous this festival was for my research. My husband and I went to the festival on Sunday and climbed aboard several ships, two schooners and a clipper. We took lots of pictures and stayed on board as long as we could. I really would have liked a complete tour, fore and aft and below decks, but I’m not comfortable with throwing around “I’m writing a book” to get special privileges. I just hope being on the ship, walking the length of it, seeing the height of the masts and feeling the wooden decks and rope rigging were enough to lend authenticity to my scenes. 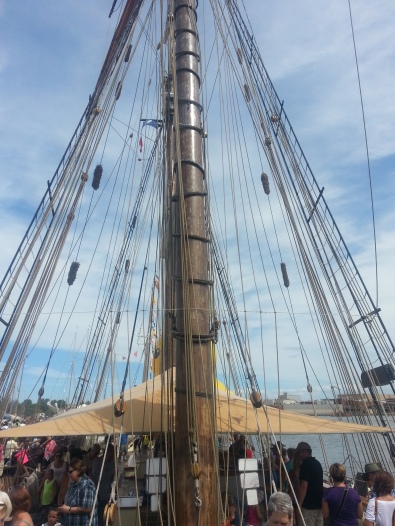 Although my research only required going on the schooners and clippers, the stars of the festival were not the ships I boarded. The stars were the Spanish galleon El Galeon and the Viking ship, Draken Harald Harfagre . We tried to wait for the Viking ship and the Spanish galleon, but the lines were long, it was hot in the sun and very dusty, and the best brewpub in America, Titletown Brewing Company, was right behind us. Plus, and most importantly, there were only porta potties. So we packed it in early and had a delicious IPA in The Tap Room before heading home. If we could have had a beer on board one of the ships with the crew and asked questions that way, maybe that would make me rethink tossing around the “I’m writing a book” idea. No such luck this time.

I thought when I was in the last stages of editing for my manuscript that I was finished with research, but I’ve realized that revision brings up a host of issues that I thought I had put to rest. I actually like this part of the writing process, not as much as writing the first draft, but giving characters more depth and improving the setting and logic of the action is well worth the time I’m spending on a little more research.