How love begins fascinates me, probably because of the way I fell in love. Sometimes people know each other for only a short time before they find they can’t live without each other. Sometimes they know each other for most of their lives and slip into life together seamlessly. Sometimes people meet and know almost immediately that they were meant to be together. That’s what happened to me. I fell in love with my husband the first time I saw him. I have no idea why, but something about him resonated with me, long before I ever spoke to him. He was my fairy tale, my Prince Charming, my knight in shining armor. 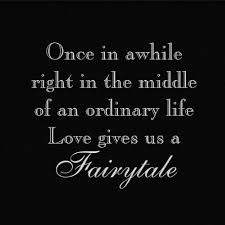 I remember the moment I saw him like it was yesterday. I was in summer school, my last quarter of college, finishing the last two classes I needed for graduation. My friend Laura wanted me to go to O’Malley’s bar with her, but I didn’t want to go out that night. Laura could be very persuasive, and I went. I’m awfully glad I did. (Thanks again, Laura!)

Located on the Oconee River, O’Malley’s was a bar with a split personality. Inside a dance bar throbbed with music and crowds of people. Outside, young men and women enjoyed fine summer weather on the deck overhanging the Oconee. The first time I saw my husband, I was walking out to the deck from inside. I looked across the wooden expanse of deck filled with people and saw a man in a sky blue polo shirt sitting on the top rail talking to his friend. He had a beautiful smile and an honest face. When I saw him, I nudged Laura and said, “You see that guy over there in the blue shirt? That’s my husband.”

I can’t tell you why I knew that, but I did, as surely as I knew my own name. Only a few times in my life have I been struck with absolute certainty of the outcome of events, but each time I’ve had that feeling, what I’ve foreseen has come true. I was certain about him.

During the course of the night, I literally ran smack into him inside the crowded bar area. He said hi, and I said hi. Then he said he was going to get a drink, and I thought my chance was over. Later that night, the man I thought I liked asked me why the guys I was talking to were all guys he knew, which really meant I shouldn’t hit on his friends, I suppose. (I wasn’t.) I saw my future hubby sitting close by, and worked up some courage. I walked over to him, and the first thing he said was, “There you are,” like he had been looking for me. I was smitten.

We talked the rest of the night. I found out he was only in Athens for three weeks. (the horror!) He was there for a class at the Navy Supply Corps School. Thank goodness I met him the second night he was there! He asked me for my phone number, and I gave it to him. But with drunken helpfulness, I tried to help him memorize it. Three days later, my friend and I were “laying out” by the pool at my apartment complex, and I wondered out loud why he hadn’t called. “He was so sincere, ” I said. “He just didn’t seem like the kind of guy who would ask for my number and not call.” Then I recalled our conversation and my “helpfulness.”

Once again, I worked up some courage, but this time no alcohol was involved. I called the Navy school and asked for him. The person who answered took my message. It was simply my name and the correct phone number. He called about 20 minutes later to ask me out for a date. That was in July. I proceeded to skip two weeks of summer school to spend time with him. I even missed an exam. When i went to plead my case to the professor, I told him the truth. I said I had met the man I was going to marry and had spent all my time with him. He allowed me to make up the exam. We became engaged the following January and married the following October.

Today, October 3rd, we have been married for 30 years, but it feels like we’ve known each other forever. He’s my best friend, the love of my life, and the man I will always follow wherever life takes us. We are living our happily ever after!